skip to main | skip to sidebar

Week 1 -- this week coincided with the start of Julie's 30 Days in your Journal online class, so I used some of the same tools and techniques we used in the first set of pages. Watercoloured and spattered the background. SU Halloween stamp in black and french script BG in copper. Added part of a new Starbucks coffee sleeve and a subway ticket that Marc brought home from Shanghai. Sharpie for journaling, as I was having trouble getting other pens to work on this surface. It happens from time to time. Pitt marker doodles around the coffee sleeve, dabs of green acrylic with Julie's punchinella stencil, circles and copper with the chicken wire shape. 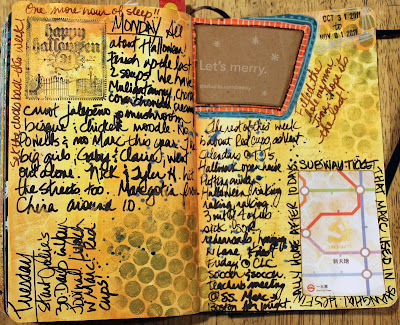 Week 2 - Started with a background technique by Cuchy, featured on Julie's blog a couple of weeks ago. Misted colours, sprinkled with salt while still wet. Fun! As I wrote, my husband surprised me with a new, and much needed and appreciated, laptop. A protective fabric like piece was inside, between the screen and keyboard, and those two triangle shapes were in it. A ready made stencil! I sprayed with a dark brown walnut ink, dried my new stencil and added it to my stash. The cardboard sun was packagin material from a mug, brushed with yellow acrylic, then sponged with brown distress ink. Added some bits of paper from the week, wrote the big letters in black acrylic, journalled with a black Pitt marker, and coloured inside the heart with a pink chalk pen. 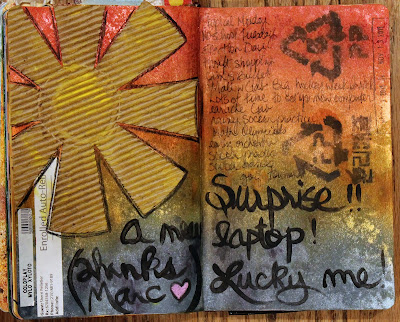 The Rest of October -- Art Journalling

Week 3 - I knew I wanted to use this stencil, but didn't want to start with my plain gessoed pages. So I used gel medium to apply strips of newpaper. Then the orange. Then then stenciled image. Then . . . I didn't want to cover it! I added a few die cut shapes and stalled again. Pulled out Julie's words stamps, chose 5 randomly, and using those as my starting point for this week's journaling. 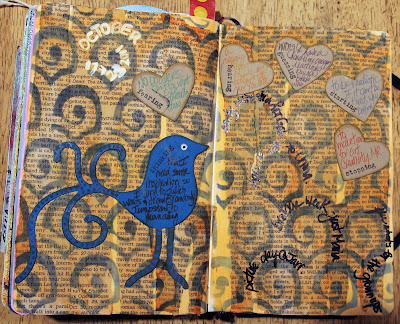 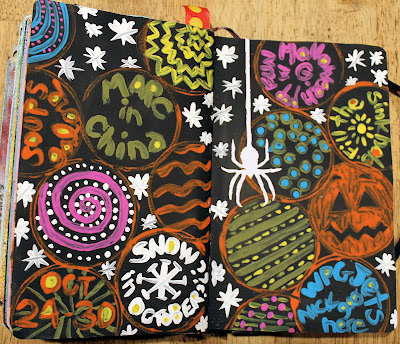 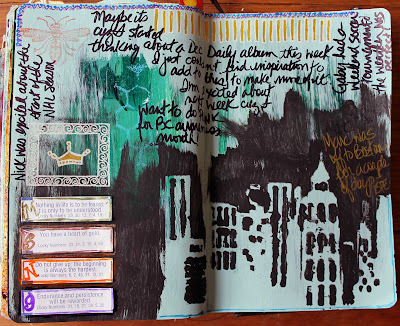 Another one of those pages that started with leftover paint from the week before. I added the light blue with the intention of using black and the skyline stencil. The results weren't very crisp. I added a TH stamped image of a bug, and a couple of white rub ons. And our fortunes from Saturday's PF Chang dinner. Some Sakura pens for a bit more doodling, and the FC Pitt markers for most of the journaling.
October Week 2 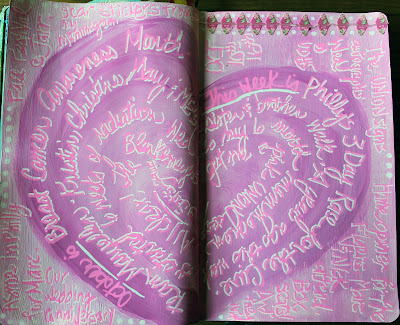 It was an especially pink week in this pink month. I knew I wanted these pages to be pink. I used pink acrylic on gessoed pages, before the gesso was completely dry. I like how it turned out. I had picked up a pink chalk pen at Michael's -- it was among all of their BC Awareness stuff. I used it for all of my journaling. The white is a Sharpey paint pen.
Posted by Sherri P eh at 11:49 PM 1 comment:

At this time of year, the predominant colours around here are the colours of fall: orange, yellow, a blazing red. But in the Pelletier house, our colours fall outside of the typical autumn colour range.

Green. Nick picked up a green suit to wear, possibly for Halloween, but first, for an experiment for his Abnormal Psych class. 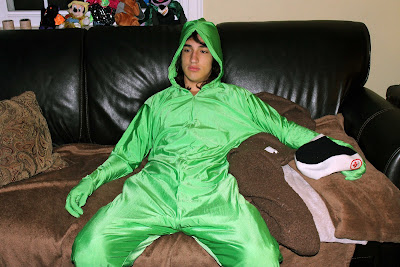 Off he went in his green suit, for a day at school. The experiment was to create a situation out of the norm, and study the reactions. And there were reactions! 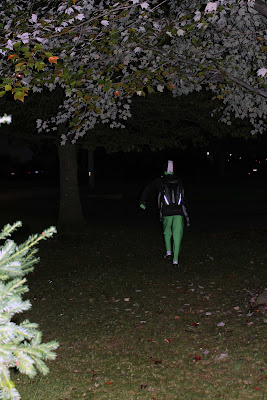 Orange. Marking the start of Flyers season. Nick dresses for school in his game day attire, on most game days. 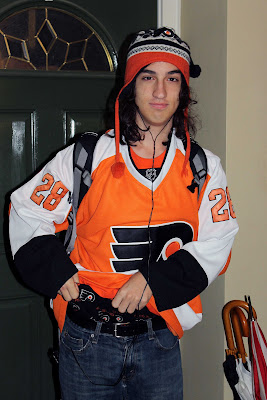 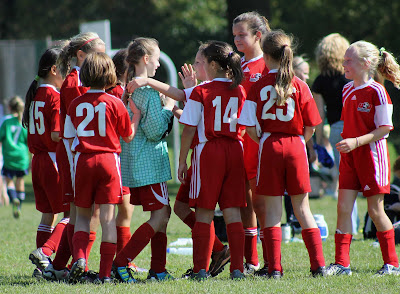 Camo: not technically a colour, but in abundance in October. Archery season begins for Marc. Last year, he started hunting locally, on a co-worker's property. 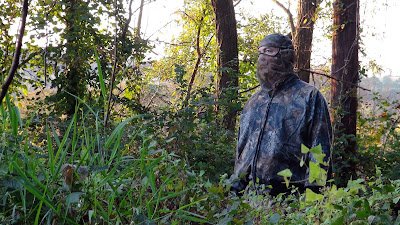 For the first time in my life, for the first time in all of our years together, I went with him. Five hours to get a 15 minute glimpse of a doe that, thankfully, Marc couldn't shoot, since his license was for a buck. Best part - the 45 minute drive together, each way. Worst part - tied. Not being able to talk for over 2 hours, losing feeling in my extremities while trying to sit still, or the bugs, especially deer ticks and skeeters. 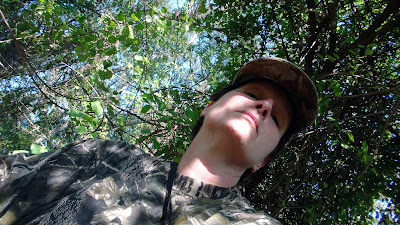 Blue: the Philadelphia Union came out to our high school. Three players, one of whom is a junior at our school. They signed autographs for over an hour, graciously signing shirts, balls, photos, cards, whatever was presented. They were awesome! 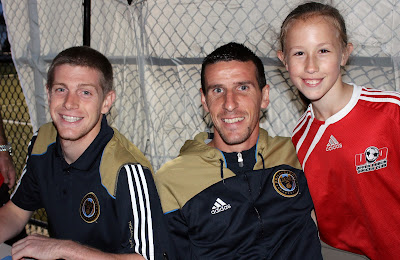 More blue: Team Maryellen, formerly Team Buststop, participating in their 3rd 3Day walk for the Cure. They first walked two years ago in celebration of the end of treatment for Maryellen, who had been diagnosed with breast cancer the year before. Last year they walked without Maryellen as the cancer had returned. This year, with heavy hearts but heads held high, they walked in her honour and in her memory.
Gaby and I got up early to catch the 7:00 opening ceremonies and start, at WG Mall. 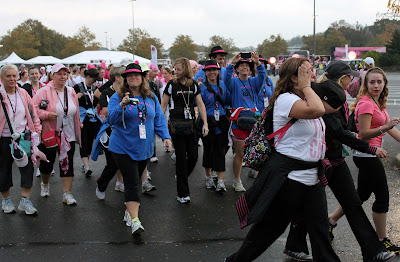 Gaby caught the bus in time for school, and I joined the crowd at Rosario's to wait for Team Maryellen. 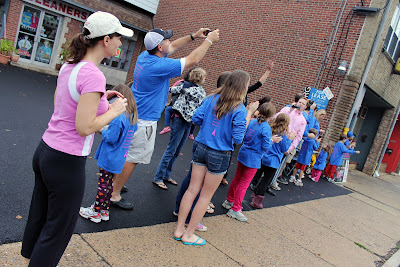 Once again, it was amazing to see all of these walkers, and even more emotional when Team Maryellen arrived. 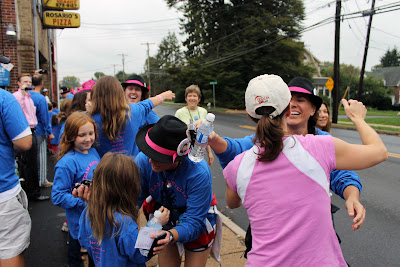 Of course there was plenty of pink, the colour for Breast Cancer Awareness month. 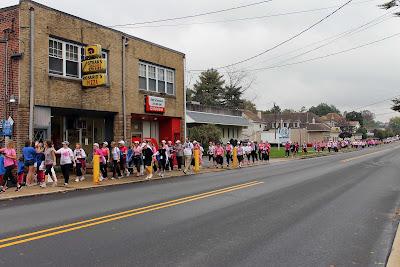 We wore pink most of the weekend in honour of the walkers. Carole and Mike gave me, and Gaby, pink Union scarves that were distributed at the game the evening before. Lucky us! 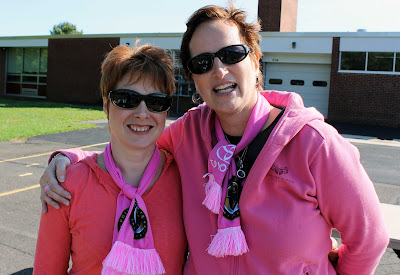 Red, white & blue: the colour of headgear at Gaby's school's Fall Festival. The kids receive tickets when playing games, and can redeem them for a variety of prizes. These hats were one of the popular choices. 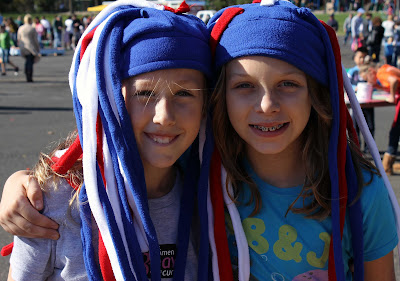 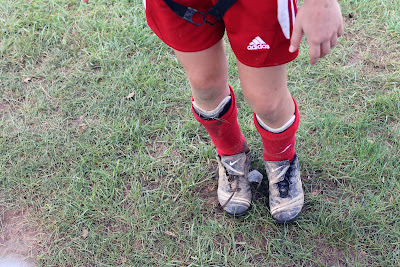 In this state, these don't make it past the front door. 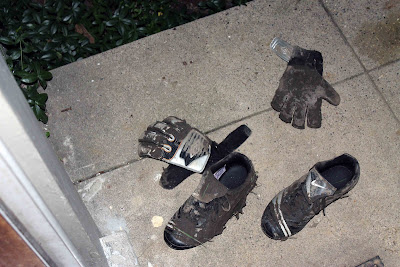 September Week Four and One Half 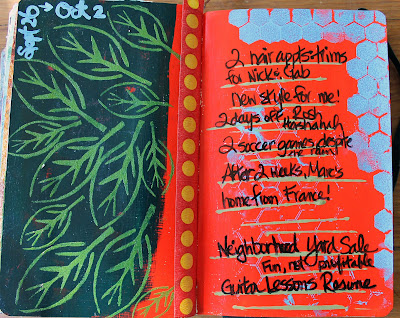 Last week, while I was working on these pages, Julie blogged about participating in a Sizzix blog hop, and shared the book she made for it. See it here.  I love love love the colours she used, and that was my starting point for this week. I blended acrylics to get this bright red orange. The black on the left is actually the result of a sloppy stencil job, so I covered it up. Once it was dry, I used Julie's leaf frame stencil and I love the result. Her punchinella stencil was used on the right, I added some journaling lines with the edge of an old gift card, and a piece of 7Gypsies tape filled the space on the left. Getting close to the end of the book, the left hand pages are tougher to work on away from the edges, cuz the left side is fat and lumpty. I did my journaling with a black sharpy this time. The paint finish is quite smooth, but it still seems to suck the life out of most of my pens. A sharpy is easier and cheaper to replace.
Posted by Sherri P eh at 10:21 PM 2 comments:

Typos in paint -- I can't even be bothered trying to fix them. But I do know how to spell practice, just not how to paint it!
This is what I did last week. 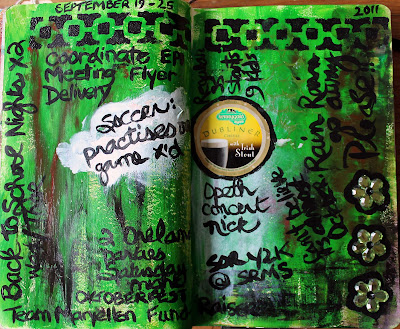 These pages got their start with leftover paint from the week before. I squeezed out waay too much green for the stencil I was using, and didn't want to see it go to waste, so I turned the page and glopped on that green. Then I added bits of red and black that were also on the palette. I also flipped the stencil from the previous page and pressed it on these pages. Then I propped the book open, or so I thought. Not well enough, cuz the pages stuck a bit. Hence the white shmears.
Once dry, I stenciled across the top with some stencils I got in a book awhile ago. Black acrylic paint, of which I again squeezed out too much. That made my journaling decision for me. A small round brush and a bit of water. I want to work on script more with a brush. Printing is fairly easy but I need more practice writing with a brush in hand.
Those lovely green rhinestone flowers are Kaisercraft, and the cheese label is just something from my stash. It's delicious cheese!
Posted by Sherri P eh at 6:21 PM 1 comment:

The idea is to blog about life, but life keeps getting in the way of blogging! I blame it on the rain. Its been a big time suck in so many ways and continued this weekend, wreaking havoc on soccer schedules and yardwork. Always something.
So once again, I'm playing catch up with my art journaling. October will be here in less than a week, and I'm finally sharing some September pages.
One of the problems with not sharing weekly, is that I can't quite remember how I did some of these. 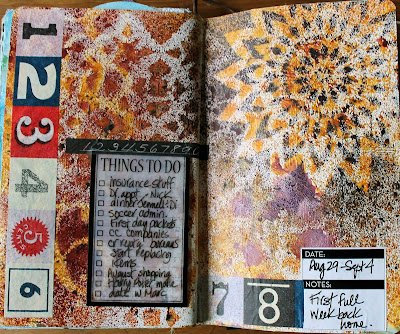 Awaiting my Julie stencil order, I pulled out some CWS stencils that I already had, and played with a couple, using Adirondack wash, Perfect Pearls Mist and Glimmer Mist. Maya Road Things To Do list, AC Date sticker, and some decorative paper tape by Cavallini & Co.I didn't spend much time on these pages. This was our first full week back home and we had a lot to do as a result of being away for so long.
September Week 2 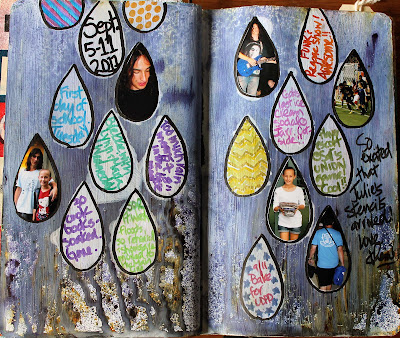 This background really evolved. I started out spraying some Adirondack wash and Perfect Pearls. I then sprayed water to create the drips. That also muted the colours. I gessoed the raindrops through my brand new JFFB stencil. Love these!
Now this is a place to play and learn and I learned that a sponge brush isn't the best applicator for my purpose. Between that and the curve in the pages, some of my raindrops lost their shape. Oh well! I used the stencil to trace the raindrop shapes from some of the week's photos, and included them. Journaled in the remaining teardrops using FC Pitt markers.
Forgot to mention that both of these were built on gessoed pages.
September Week 3 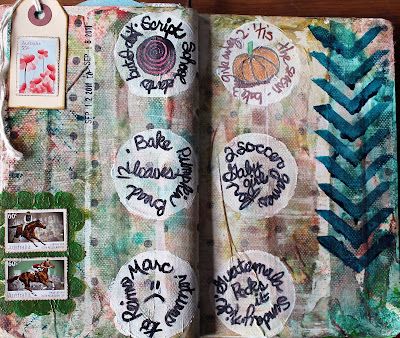 With all of the France business mostly behind us, I was able to spend a little more time on these pages. While the gessoed base was still wet, I added strips of a polka dotted fabricky paper that was in the box with sneakers I purchased a couple of months ago. I tore them, so there's no consistency. I used gel medium to make them stick. The gesso alone wasn't quite cutting it.
I signed up for Julie's Stenciling 101 and this page made me realize I need to visit it and learn how to build more brilliant and defined layers. I also need to develop patience. The background might look better had I let it dry, rather than dabbing at it with a paper towel. Couldn't help myself!!
I used Julie's chevron stencil on the right, with a heavy bodied acrylic. Same with the punchinella dots on the left, but there I went over it again with a different color and ultimately covered it with jockey stamps! I also used a home made stencil -- the packaging from a 6 pack of Trader Joe's yogurt. With my fingers, I applied a white acrylic to those 6 holes in the yogurt pack. I patiently waited  before adding any journaling and doodles. I added the 3 Australian stamps, layering one of them on a blank Lisa Leonard tag that I had been hanging on to. A little distress ink around the edges of that tag and those stamps. Done.
﻿
Posted by Sherri P eh at 12:02 AM 4 comments:

This is a Flickr badge showing public photos and videos from Sherri P eh. Make your own badge here.